I have complained many times of the difficulty in finding the truth about the origin and development of Christianity due to the widespread Christian practice of interpolating passages into the witnesses, especially the so-called neutral witnesses such as Seutonius,  Cassius Dio, Josephus, Pliny the Younger, and others. But as I read the church fathers I discovered almost all of those writing before the 4th century had also suffered interpolation. This causes me to be angered, frustrated, and saddened all at once.

But then a few days ago, as I tripped over another Interpolation in Origen, right after finding a rather mindless one in Irenaeus, and Epiphany happened. I realized that I was looking at the matter all wrong. These interpolations are telling us something very important. Of all the subjects concerning Christianity these interpolations seem to cover only a few points of contention. And they spread from one work to another, each reinforcing the other. But why were they done? What was so important about them?

Simon Magus, the Root of Heresy:
When gazing at the Gozzoli image to the left, where Simon Magus has gone splat on the pavement in front of Emperor Nero after Peter compels a daemon to release Simon while in flight, I realized there was a reason the Simon story was important. Why the pseudo-Clementine Recognitions and Homilies chose this character to play the role of the lead villain in Peter's tale. And why so many place him at the root of all heresies. So strong was this myth of heresy's origin with Simon that later scribes found it necessary to implant his story in earlier works which had no mention of him.

Was Muhammad From Petra?

Daniel Gibson makes a compelling case based on the Qibla directions and Islamic descriptions of Muhammad's home city that it was in fact Petra and not today's Mecca. And that the black stone was moved from Petra to Mecca during a respite in the war between the Umayyad rulers and the Abbasid rebels. Mecca was far removed from Damascus and safe from the Umayyads, but Petra was not and easily besieged. The Masjid al-Haram originally was in Petra and all the early mosques built before 740 AD pointed to Petra.

This goes against modern Islamic tradition that states the change in worship direction was from Jerusalem to Mecca. Gibson goes through the evidence and comes to a very different conclusion. I found this fascinating and a good watch. I hope you enjoy it as well.

One cannot examine the relationship between 2 John and 3 John without looking at the wider picture of the Apostle whose name was ascribed as author of these two works. And especially the role his legend played in the struggle of the structure of the emerging Church from a rag tag collection of house churches founded by itinerant preachers, which after some significant time grew into more formal organizations with dedicated houses of worship ("synagogues" is the word used in the New Testament).

And no place was this legend more at the fore than Ephesus, where for all the world it appears that John replaced Paul as the patron saint, but only after great factional struggle. The replacement seems to have been not just limited to Ephesus, but probably all of Asia Minor and Anatolia. It is a struggle that left it's mark in several books of the New Testament. [1]

Read more »
Posted by Stuart Waugh at 1:34 AM No comments:

Today I feel like venting. So I am going to lay out what I see as the six primary assumptions made in New Testament scholarship, none of which should be assumed. Assuming even one of these to be true will lead bad results.

I mean this post to be something of a conversation starter, and I am open to refinement of what I see as being the root of the problem with New Testament studies today.

Simon Peter and the Cheshire Cat: Was Peter in the "Original" Gospel of John?

... All right,' said the Cat; and this time it vanished quite slowly, beginning with the end of the tail, and ending with the grin, which remained some time after the rest of it had gone.

`Well! I've often seen a cat without a grin,' thought Alice; `but a grin without a cat! It's the most curious thing I ever saw in my life!'

The Cheshire Cat in Lewis Carroll's Alice in Wonderland has the remarkable ability to appear and disappear at will. At one moment he is conversing pleasantly, imparting information Alice already knows, and the next vanishing from sight. Simon Peter performs this very trick before our eyes in the Gospel of John.

The Sudden Appearance of John in the Marcionite Gospel

Tertullian (AM 4.11.3) is right to exclaim, Unde autem et Ioannes venit in medium? Subito Christus, subito et Ioannes when John suddenly appears in Marcion's Gospel (Luke 5:33), or rather his disciples, with no back story and no prior introduction. Tertullian compares John's entrance to that of Jesus (Subito Christus), who in Marcion's Gospel enters by descending into Capernaum (Luke 4:31) without warning or introduction. So too here, the mysterious John's disciples are compared to Jesus' disciples. As there is no Baptism in Marcion's Gospel, there is no reason for John to appear. So why is here, and why is he in the Marcionite Gospel at all?

In my reconstruction of the Marcionite version of Philemon I discovered that Tertullian's comment on [1] is not quite the case, at least with respect to the received text. More accurate is his comments about Laodiceans/Ephesians noting, "The heretics hands cut so swiftly, I do not wonder when syllables are lacking, as often whole pages are felled." That is to say, the Marcionite text differs not only in entire paragraphs of material, but a few words here and there, and even a syllable or single character. So it is in Philemon.
the epistle, "To this epistle alone did its brevity avail itself against the falsifying hands of Marcion," [2] And so I have found in this letter, like all the others, a layer of material, albeit smaller in this brief one, with a distinct Catholic flavor. To be fair the Catholic text as Tertullian knew it may not have included some of the material we have today. Only small scraps survived from before the Decian [3] persecution, so we can only guess the content of the text before the mid 3rd century.

Philemon is no different than any other Pauline text. Even in it's brief form it possesses openings, closings, and formulas from additional hands. The Marcionite construction could not assume the content. But a lack of Patristic commentary meant that my efforts had to rely upon the vocabulary, 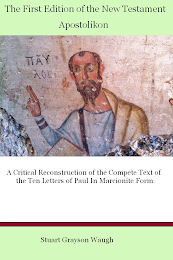